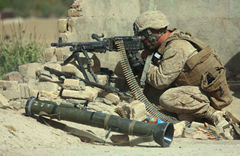 "We the peoples of the United Nations determined to save succeeding generations from the scourge of war..."

The war against Afghanistan is illegal. The US, assisted by Canada and Britain is bombing Afghanistan and will perhaps use additional force with ground troops for the stated purpose of capturing or killing Osama bin Laden and others associated with his organization and of toppling the Taliban government.

No international or national law or policy legalizes these. attacks on Afghanistan. No resolutions of the United Nations' Security Council or the North Atlantic Treaty Organization could provide a legal justification for these attacks and none do.

The war against Afghanistan violates international law including the Charter of the United Nations (The Charter), the Geneva Conventions and the relevant provisions of the eleven International agreements dealing with the suppression and control of terrorism. The attacks by bombing and the use of other military force are war crimes pursuant to the Rome Statute.

The Charter prohibits the use and the threatened use of any force in their international relations. The Charter specifically prohibits the use of force to topple foreign governments. It goes without saying that all national and International laws forbid the killing of non-combatants (i.e. arguably all Afghanis) the bombing and other use of force in Afghanistan will inevitably kill and injure large numbers of non-combatants. The October 11 edition of the Vancouver Sun reports 200 people in Afghanistan killed in US bombing raids including 4 United Nations employees. October 13, 2001 reports indicate a residential area hit by a missile. Mass killing of non-combatants is considered by the world community to be the most egregious of crimes.

The Preamble to the Rome Statute, in reference to such crimes states, "Mindful that during this century millions of children, women and men have been victims of unimaginable atrocities that deeply shock that conscience of Humanity." The United States, United Kingdom, Canada and Afghanistan are all Member States of the United Nations. The Charter of the United Nations imposes on members the binding obligation to settle disputes in a manner that ensures the maintenance of peace and justice. Article 2 of the Charter prohibits the use or threatened use of force against another state. [See below] The Article 2 prohibition applies to all force and is a rule of customary international law. As such the Article 2 prohibition is universally binding even on the few states not members of the United Nations.'

The Article 2 prohibition has been reiterated in numerous resolutions of the UN General Assembly. For example on 17 December 1984 the UN General Assembly passed a resolution affirming the inadmissibility of the policy of State terrorism including actions by States aimed at undermining the sociopolitical systems in other sovereign states. This resolution specifically prohibits the use of military action and contains the demand:

"...that all States take no actions aimed at military, intervention and occupation, forcible change in or undermining of the socio-political system of States, destabilization and overthrow of the their Governments and, in particular, initiate no military action to that end under any pretext whatsoever and cease forthwith any such action already in progress."

The Preamble to the Charter states the purpose of the United Nations is "to save succeeding generations from the scourge of war".3

Resolution 1373 (2001) adopted by the Security Council at its 4385th meeting on 28 September 2001 (incorporating the earlier resolution of 12 September) affirms the responsibility of Member States to take only those measures that are: "in compliance with national and international law including international human rights standards' to prevent and suppress terrorist attacks and to take action against the perpetrators.

Security Council Resolution 1373 specifically restricts member states to actions that are authorized by law and in accordance with the Charter of the United Nations.

Canada is already largely in compliance with the directives contained in Resolution 1373 and has promulgated regulations under Canada's United Nations Act to implement provision of the resolution, including prohibiting financing and fundraising and for freezing the assets of terrorist organizations.

Article 51 of the Charter defines Member States' right of self-defence. This article neither authorizes bombing and armed force as self-defence nor bestows legal authority for the US to wage war. Article Si gives Member States the narrow power to defend themselves against a continuing armed assault until such time as the Security Council intervenes to maintain and restore peace and security. Article Si of the Charter does not create any right to make retaliatory attacks or to engage in the use of force to repel anticipated armed attacks. The right to self-defense in Article 51 is restricted to actions that are necessary to, repel and proportionate to an ongoing armed attack and only exists until the Security Council takes measures to restore peace and security. The right to self defense is restricted to self defense action and is further restricted to those actions necessary to maintain "international peace and security" and must be carried out in accordance with the Charter.

The entire Charter is based on the premise that Member States must maintain international peace, security and justice and may not use force to settle international disputes or to remove foreign governments. Article 51 does not displace the obligation imposed on States by Article 2.4

Media coverage also infers that some legal authority for the use of armed force against Afghanistan or the Taliban was created by the resolutions of the North Atlantic Treaty Organization (NATO). That assumption is entirely false and is made clear from its' resolution below.

The Parties agree that an armed attack against one or more of them in Europe or North America shall be considered an attack against them all and consequently they agree that, if such an armed attack occurs, each of them, in exercise of the right of individual or collective self-defence recognized by Article 51 of the Charter of the United Nations will assist the Party or Parties so attacked by taking forthwith, individually and in concert with the other Parties, such actions as it deems necessary, including the use of armed force, to restore and maintain the security of the North Atlantic area. Any such armed attack and all measure taken as a result thereof shall immediately be reported to the Security Council. Such measures shall be terminated when the Security Council has taken the measures necessary to respect and maintain international peace and security. Article 5, The Washington Treaty.