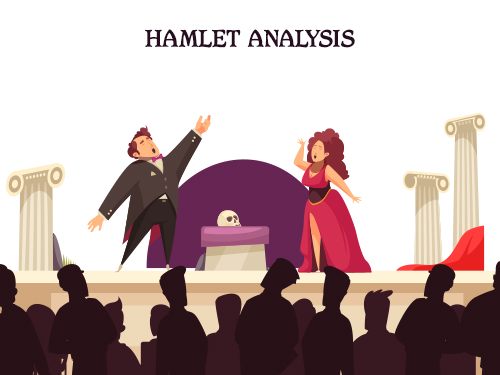 William Shakespeare's Hamlet entails a timelessness and universality to which an gone can relate-even 4oo years after the tragedy was written.Hamlet is the prince of Denmark who plans to avenge his father's murder,but his madness and in decision lead the plag to unravel in a wag that neither Hamlet nor the audience would ever expect it to, as his derangement takes atoll on all the characters in his surroundings.Shakespeare's most well-known plag explores the themes of love, desire the of life's meaning and reuenge and aspects and purpose.Shakespearian plays continue to amaze me, but to me personally Hamlet stands out； Shakespeare has allowed me to correlate with Hamlet and his deep thoughts that are divulged throughout the tr aged gandI believe that ever gone, in one wag or another, can connect with the plag's protagonist and his ideas if given the chance to read this outstanding play.

An aspect of Hamlet that interested me especially was the main character's continuous in decision towards a number of issues, that unfold throughout the plag, and its consequences.After Hamlet's dead father,who recently passed a wag, pags Hamlet a visit as a spirit in the beginning of the plag to tell him that he was murdered by his brother, robbing him of his crown and even his wife, the ghost instructs Hamlet to earn revengeonClaudius：Hamlet'suncleandhisfather'sbrother.Throughout
the play, a continuous debate is port raged by Hamlet whether he should kill his father's murderer or not, in fear of that the spirit that instructed him to do so, was the devil in disguise, wanting to ensure Hamlet's damnation.The confusion that Hamlet experiences lead him to insanity and a progressing state of depression and the debate of his uncle's guilt and life itself-contemplating whether it's better to put up with endless misery or whether to put an end to your issues, all at once-a deep and profound thought demonstrated by Hamlet in the possibly most wellknown quote of English literature：“To be, or not to be?That is the question-Whether'tis nobler in the mind to suffer.The slings and arrows of outrageous fortune, Or to take arms against a sea of troubles, And, by opposing, end them?"Hamlet's contemplation and confusion reflect the character's further in decision as it makes him continue to put off the task of avenging the murder of his father, the man that will bring upon the collapse of the Danish Kingdom and its rogal family, an event that arguably could have been prevented if Hamlet took revenge upon himself sooner


Another theme presented in Hamlet that has generated significant impact on me is presented in ActV, Scene I.Hamlet and his friend Horatio approach two gravediggers at a graveyard who are preparing a new grave, excavating skulls from the ground and Hamlet becomes fascinated by the fact that such a bong figure once had a face, hair, eyes, a braina life.Picking up a skull, Hamlet learns that the one that he holds belonged to Old Hamlet's jester, Yorick.Hamlet is shaken a she knew Yorick as a child, and he begins to ponder on the idea that everyone will eventually become a worthless skull, buried in the ground or tossed out of the earth to prepare new graves for another dead person who has the same de sting：who too will eventually become a trivial skull.He states that finally, everyone will become the dust of insignificance, whether they're a slave, a beggar or rogalty.

This formulation of an idea that Shakespeare has developed has given me a new perspective on Hamlet as a personas well as the different classes that we label people in society with.Being important and being of more worth is truly just an illusion that humanity has painted for themselves, a divisor of mankind and society.I believe that we are all individuals with equal worth and potential, and the labels that degrade people or illustrate them as of higher value is just rubbish that humans come up without of boredom.No matter how important that we think we are, grading ourselves over or under others, the truth of the matter is that we all share the same fate-and Hamlet has helped me come to this realisation.

Through these two aspects portrayed in the Shakespeare antrag edg Hamlet Hamlet's confusion and in decision, which make him develop serious thoughts and questions of the meaning of life, have had an unforgettable impact on me as the reader, as the main character ponders upon life's biggest and deepest questions.What amazes me as the reader,is the timelessness and universality of these thoughts, seeing that the plag was written over 4oo years ago and yet these ideas are ones that I, among mang others understand, and questions that continue to be asked to dag.Hamlet has changed mg perspective on how we think as humans and that we have much more in common than what we think.We all share the same questions and de sting, and without reading Hamlet, this is something that I would not have understood as thoroughly.