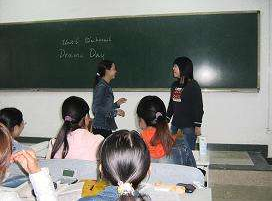 As is said in a famous old Chinese saying, “To lead means to direct, help, and achieve.”Actually,in the society, leaders are admired by others mainly because they organize ordinary people to achieve a common goal which is beneficial for the majority. In this aspect, I agree that leaders are elected because they can meet the demands placed on them, as is made evident from a series of historically famous events. In case if some leaders are not elected by people but are hereditary or obtain their positions from illegal ways, they will soon be punished and unseated out of their positions.

No matter in the United States or in China, countless historical examples have already illustrated the generation of leaders out of people’s urgent demands. For example, in the eighteenth century, the burgeoning industry such as the shipbuilding industry in the northern part of the North America around New York had made American people unsatisfied with the unreasonable control over them by the British government. At that time, the calling for independence was growing ever stronger, thus making it necessary for the American people to fight against the Great Britain. In order to win this war, Americans extremely needed a leader, so Washington, with his strong aspiration for the independence of the North America and with his brave and optimistic attitude, was espoused to be the leader among American people. Clearly, Washington was not chosen because he was more handsome or smarter or richer than others, nor because he wanted to enjoy high social status and luxurious lifestyle. Actually, the leading position at that crucial time meant tons of heavy tasks for him to fulfill. He did his work, led to the establishment of the United States of America, and thus was respected by millions of people in this new country.

Actually,President Washington was not alone. In the establishment of the People’s Republic of China, Chairman Mao was also the key leader taking up the super challenging demands of owning land. In the early twentieth century, China was struggling in sheer poverty due to continuous wars among the dyingTsing Dynasty and the newly emerging armies. As a result, people couldn’t reside in one place for long,crops failed, and tens of thousands of Chinese starved to die. Therefore, the main social problem targeted on agriculture. In particular, majority of Chinese people were in urgent need of their own land. Only in this way could they be guaranteed security. However, during the intermittent wars, different army generals raised different ideologies, but only Mao Zedong raised the slogan of “making the peasants own their own land.” Apparently, he hit the bull’s eye, targeting precisely on the very social problem and thus winning the majority of Chinese people’s support and respect. As a result, he became the leader of Chinese Red Army, and eventually beat all other competitors to reunite China and to establish a new country. These two examples are about different countries, diffferent cultures, different ideologies, and different historical times, but a common rule is quite clear: whoever meeting the demands of people can finally be the influential leader.

Of course,in the modern China we also have some unqualified leaders who take their leading positions not because they want to fulfill some tasks of great concern but because they know “somebody” and bribe the higher and mighty. However,since they cannot meet people’s demands, it is very easy for their illegal doings to be exposed in the mass media such as TV news, newspaper reports, or blogs. Once exposed, their leading positions cannot last long. From this perspective, we can also predict with confidence that leaders should be generated from the demands put on their shoulders.

In conclusion,to be a leader means to direct people going out of their difficulties or confusions, to help them realize their situations and themselves, and to achieve some common goals which will be beneficial to the people and even to the whole world.