Women and economics
The profession’s problem with women could be a problem with economics itself
Economist Print edition | Christmas Specials Dec 19th 2017 | CAMBRIDGE, MASSACHUSETTS
ECONOMISTS like to see themselves as generators of rational explanations. They scorn fuzzy thinking and beliefs that have no basis in fact; they attack problems with a ruthless logic. Happy as they are to turn this beady gaze on others, though, when it comes to looking at themselves they may be as befogged as anyone else.
先对经济学家这个群体的特征从宏观上进行剖析，以引入本文的主题。
profession
a job that needs a high level of education and training
〔需要高等教育和训练的〕专业，行业
scorn
the feeling that someone or something is stupid or does not deserve respect
鄙视，蔑视，轻视
fuzzy
unclear or confused
糊涂的，不明确的
ruthless
determined and firm when making unpleasant decisions
〔作出令人不快的决定时〕坚决的
beady
have/keep your beady eye(s) on sb/sth
to watch someone or something very carefully – used humorously
睁大眼睛看某人/某物〔幽默用法〕
gaze 凝视
befogged 被困惑的
Take the issue of female representation in their field. Academic economists are overwhelmingly male. According to information from university websites, about 20% of Europe’s senior economists are women. In America, 15% of full professors are women. At Harvard, arguably the most prestigious economics department in the world, the faculty pictures that beam down from the wall feature 43 senior members of the department. Only three are women. Two have tenure.
运用百分比对经济学科领域男女比例进行概述。
overwhelmingly 压倒性的
prestigious
admired as one of the best and most important
有威望的，有声望的，有威信的
beam
[T always + adv/prep] to send a radio or television signal through the air, especially to somewhere very distant
发送〔无线电或电视信号〕
feature
[T] to show a film, play etc
放映〔电影〕；上演〔戏剧〕
tenure
This does not mean there is necessarily a problem with economics per se. Though there are fewer women in economics than in the humanities, the other social sciences or the life and environmental sciences, there is similar under-representation in mathematics, engineering and physics.
说明男女比例差距较大的情况不仅仅局限于经济学科领域。
per se
used to say that something is being considered alone, not with other connected things
本身；就本身而言
But Donna Ginther, a professor of economics at the University of Kansas, has found telling evidence that women are not just scarcer in economics; they also face a thicker glass ceiling.  Having started a job that has the prospect of tenure, women achieve that aim at a rate 12 percentage points below that of men. This is true even after adjusting (as much as possible) for differences in family circumstances and publication record. In American universities women who achieve tenure are promoted to full professor within seven years at a rate of 29% compared to 56% for men. Adjusting for other factors, Ms Ginther still finds a gap of 23 percentage points. In other social and natural sciences such differences are a thing of the past.
通过引用学者的研究作为论据，用于支持在经济学学科存在男女学者的数量差异以及成功完成自己学术目标的比例差异的论点。
telling
having a great or important effect
有力的；有效的；有重大影响的
glass ceiling 玻璃天花板
Unsurprisingly, given the above, women in economics are unhappier both than the men they work with and than the women who work in other disciplines, including those with similar gender disparities. In maths, computer science, engineering and the physical sciences, Ms Ginther found no discernible difference between the satisfaction reported by men and women with tenure or on the tenure track. In economics the gap is quite big. And it is growing larger (see chart).
discernible
If something is discernible, you can see it or recognize that it exists. 看得见的; 辨认得出的 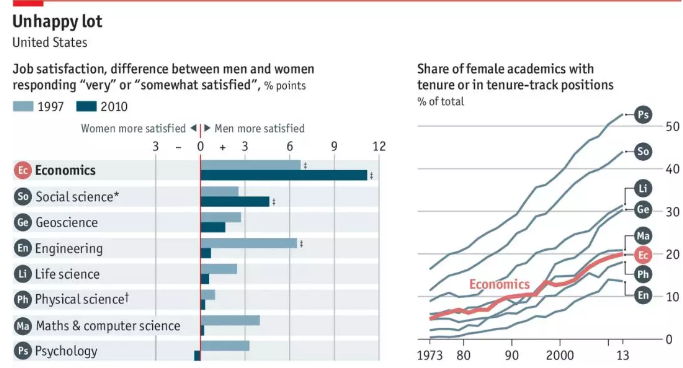 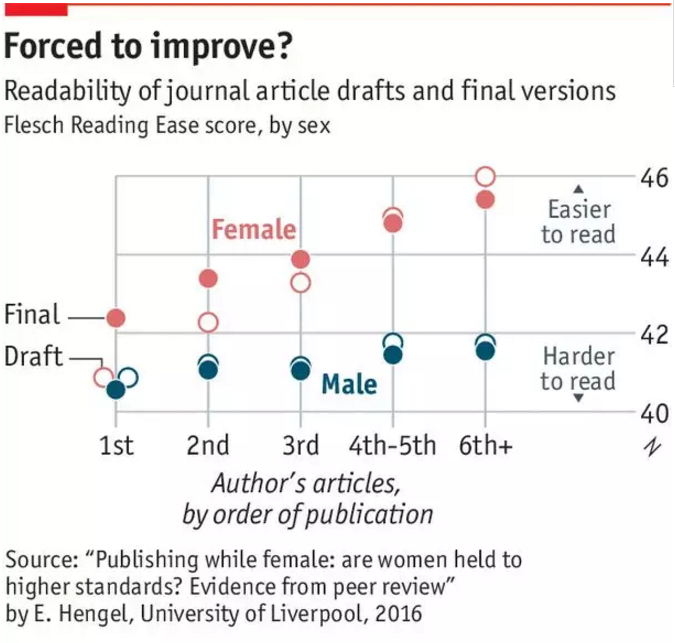