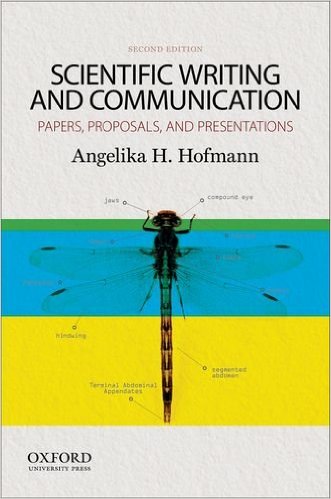 1. Getting Your Writing Published.

2. The Most Common Habits from more than 200 English Papers written by Graduate Chinese Engineering Students.

Writing principle 1: Write with the reader in mind.

"With" is one of the vaguest and most ambiguous terms in English. Because "with" can mean so many things, it's clearer to use a precise term whenever possible.

Scientific writing has many technical terms. Therefore, to keep your writing from being too heavy, choose simple words for the rest of the sentence.

Avoid any verbosity and wordiness by omitting unnecessary words and phrases and jargon (一个科技或专业群体内部使用的行话，不同于普遍使用和接受的术语).

Writing principle 5: Avoid too many abbreviations.

Writing principle 10: Get to the subject of the main sentence quickly, and make it short and specific. If possible, use central characters and topics as subjects.

Writing principle 12: use the first person.

Writing principle 13: use the active voice.

The Abstract, Materials and Methods, as well as Results sections should employ past tense as they refer primarily to your own work. However, most of the Introduction describes previously established knowledge in present tense. The discussion relates your work to previously established knowledge. This section is the most difficult to write as it includes both past and present tense (Tense can be mixed in the same sentence or paragraph). Note that generally, remarks about the presentation of data should be in present tense, and descriptions of assumptions and theory should also be described in present tense in your paper.

Writing principle 16: write short sentences. Aim for one main idea in a sentence.
Short, simple sentences tend to emphasize the idea contained in them. The longer a sentence gets, the more difficult it is for the reader to identify what is of primary importance. Writing a short sentence that highlights the main topic is particularly important at the beginning of a section or paragraph.

What scientific authors should be aiming for is an average sentence length of about 20 to 22 words. This means that some sentences will be longer and some shorter, but the average number of words per sentence overall should be around 20 to 22.

Verbs are perhaps the most important part of an English sentence. With strong and active verbs, your writing enlivens and energizes. Avoid using weak verbs.

Noun clusters are nouns that are strung together to form one term. In English, nouns and adjectives can be used to modify other nouns. However, when nouns appear one right after the other, it can be difficult to tell how they relate to each other and what the real meaning of the cluster is. Avoid clusters of nouns, especially if there are more than two or three nouns in the cluster. These noun clusters are awkward and sometimes downright incomprehensible.
Note that not all sequences of nouns are noun clusters. Some noun pairs and clusters--such as "water bath", "cell wall", "egg receptor" and "sucrose density gradient"--are recognized as single words and accepted terms.
Writing principle 19：Use clear pronouns

It is essential that you use clear pronouns. Unclear pronouns are one of the most common problems in scientific writing. If the pronouns that refers to a noun is unclear, the reader may have trouble understanding the sentence. Be sure that the pronouns you use refer clearly to a noun in the current or previous sentence. If there are too many possible nouns the pronoun can refer to, repeat the reference noun after the pronoun.

Writing principle 20：Use correct parallel form and arrange ideas in a list to read from shorter to longer
Lists and ideas that are joined by "and", "or" or "but" are of equal importance in a sentence and so are ideas that are being compared. These ideas should be treated equally by writing them in parallel form. To write ideas in parallel form, the same grammatical structures are used. These grammatical structures can be single words, prepositional phrased, infinitive phrases, or clauses. If parallel ideas are written in parallel form, the reader does not get distracted by the form but can concentrate on the idea.

English as a second language (ESL) speakers not only have to formulate their research papers and talks in English, they also need to realize that the English language is a living thing deeply influenced by Internet communication and constantly changing, also in science.

Prepositions are little Words that link nouns, pronouns and phrases to other Wordsworth in a sentence, indicating their temporal, spatial, or logical relationship to the rest of the sentence.

Most verbs can be used with more than one preposition, but you should be sure to choose the preposition that reflects your intended meaning. If you are unsure which preposition to use, consult a dictionary. However, be careful: the meanings of corresponding prepositions in English and other languages do not always coincide. Even native speakers are prone to incorrect use of prepositions.
A few words and expressions need special attention:

1. Compared takes the preposition to when it refers to unlike things. It takes with when two like things are examined.

3. Do not use following as a preposition.

Guideline: Do not omit endings of verbs.

ESL speakers who do not pronounce endings of words fully often omit endings of verbs in writing as well. Do not omit "-s", "-es", "-ed" or "-d" endings to use the third-person ending of a verb form or to express the past tense or past participle form of a verb.

Guideline: Follow a verb with the correct gerund or infinitive form.

Guideline: Distinguish between adjective and adverb.

Guideline: Ensure that every sentence has a subject.

If you cite abstracts for meetings, conference proceedings, personal communications, or unpublished data in the text, you should give a publication status in parenthesis. Following are a few sample wordings for indicating publication status:

Summarizing and paraphrasing another's work without acknowledging the source.

Paraphrasing means taking another person's ideas and putting those ideas in your own words. This is the skill you will probably use most when incorporating sources into your writng. Although you use your own words to paraphrase, you must still cite the source of the information in the text at the end of the sentence or idea. It is important that you distinguish between paraphrasing and plagiarizing. Changing a word or two in someone else's sentence or changing the sentence structure while using the original words is not paraphrasing but plagiarizing.

Generally, readers expect the parts of the Introduction to be arranged in a standard structure: a "funnel", starting broadly with background information and then narrowing to what is the question of the paper. Introductions for research papers should contain the following elements:

Although not an absolute necessity, the author of this book recommends including main results and conclusions as well as to state the overall significance of the paper to round up this section.

Ideally, an introduction of a typical journal article should be one to two double-spaced pages (about 250-600 words).

Check the Instructions to Authors of your target journal to ensure that you are within the set word limits for the Introduction.

Introduction Guideline 4: Provide pertinent background information, but do not review the literature.

Note that you should not review the topic when you are writing a research paper. A summary pertinent to the research you are presenting in the paper should suffice.

The most important element in a research paper is the research question or purpose of the work. THe question/purpose is the "central point" of your Introduction and of the paper as a whole. It therefor needs to be worded very carefully. If the central point is stated precisely, the reader immediately has an idea of what to expect in the paper. Furthermore, the reader can read the paper in a directed way rather than blindly, and the experiments make more sense.

The research question/purpose of a research paper should name the variables studied as well as the main features of the study. Note that the question/purpose is usually not written in the form of a question but as an infinitive phrase of as a sentence, using a present tense verb, as in the next examples: a To determine if the triggered cellular processes affect the rRNA structure and folding dynamic in vivo, ...

In general, the experimental approach is short--usually one sentence, at most, two or three sentences.

After the experimental approach, you may briefly state your main results and conclusion. Although their inclusion is not a must, know that readers like to read about the main results and conclusion of your work in the Introduction.
At last, consider stating why your findings are important. If you state the significance or implication at the very end of your Introduction, it not only rounds up this section nicely, but also provides the overall perspective of your work for the reader.

To ensure good flow or continuity, that is, to ensure that the overall story is clear, you should use all the techniques of cohesion and coherence presented in this book.

Introduction Guideline 9: Signal all the elements of the Introduction.

Important writing principles for the Introduction

下面是一个使用混合时态的例子：Herbert et al (9) found that peanut butter can be contaminated with Salmonella.

2. How to read a research paper.

3. How to reply to referees' comments when submitting manuscripts for publication.