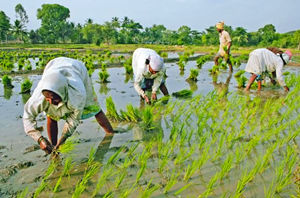 Indian agriculture is characterised by a preponderant majority of small and marginal farmers holding less than two hectares of land, less than 35.7% of the land, is under any assured irrigation system and for the large majority of farmers, the gains from the application of the science & technology in agriculture are yet to be realised. Farmers, therefore, require support in terms of development of infrastructure as well as extension of improved technologies and provisions of requisite inputs at reasonable cost. India’s share of world’s agricultural trade is of the order of 1%. There is no doubt that during the last 30 years, Indian agriculture has grown at a reasonable pace, but with stagnant and declining net cropped area it is indeed going to be a formidable task to maintain the growth in agricultural production. The implications of the Agreement would thus have to be examined in the light of the food demand and supply situation. The size of the country, the level of overall development, balance of payments position, realistic future outlook for agricultural development, structure of land holdings etc. are the other relevant factors that would have a bearing on India’s trade policy in agriculture.

Implications of the Agreement on Agriculture for India should thus be gauged from the impact it will have on the following:

i) Whether the Agreement has opened up markets and facilitated exports of our products; and

ii) Whether we would be able to continue with our domestic policy aimed at improving infrastructure and provision of inputs at subsidised prices for achieving increased agricultural production.

The Agreement on Agriculture forms a part of the Final Act of the Uruguay Round of Multilateral Trade Negotiations, which was signed by the member countries in April 1994 at Marrakesh, Morocco and came into force on 1st January, 1995. The Uruguay Round marked a significant turning point in world trade in agriculture. For the first time, agriculture featured in a major way in the GATT round of multilateral trade negotiations. Although the original GATT – the predecessor of the World Trade Organisation (WTO) – applied to trade in agriculture, various exceptions to the disciplines on the use of non-tariff measures and subsidy meant that it did not do so effectively.

The root cause of distortion of international trade in agriculture has been the massive domestic subsidies given by the industrialised countries to their agricultural sector over many years. This in turn led to excessive production and its dumping in international markets as well as import restrictions to keep out foreign agricultural products from their domestic markets. The obligations and disciplines incorporated in the Agreement on Agriculture, therefore, relate to

IMPACT OF THE AGREEMENT ON AGRICULTURE ON INDIAN AGRICULTUTRE

Indian agriculture enjoys the advantage of cheap labour. Therefore, despite the lower productivity, a comparison with world prices of agricultural commodities would reveal that domestic prices in India are considerably less with the exceptions of a few commodities (notably oilseeds). Hence, imports to India would not be attractive in the case of rice, tea, sunflower oil and cotton. On the whole, large scale import of agricultural commodities as a result of trade liberalisation is ruled out. Even the exports of those foodgrains which are cheaper in the domestic market, but are sensitive from the point of view of consumption by the economically weaker sections are not likely to rise to unacceptable levels because of high inland transportation cost and inadequate export infrastructure in India.
Because of increasing price of domestic agricultural commodities following improved export prospects, farmers would get benefits which in turn would encourage investment in the resource scarce agricultural sector. With the decrease in production subsidies as well as export subsidies, the international prices of agricultural commodities will rise and this will help in making our exports more competitive in world market

Both the pattern of production and price expectations will increasingly be influenced by the demands and trends in world markets. On the one hand, the price incentive could be the best incentive and could give a strong boost to investment in agriculture as well as adoption of modern technologies and thereby to the raising of agricultural production and productivity. On the other hand, the rise in domestic prices would put pressure on the public distribution system and accentuate the problem of food subsidy & freedom to export agricultural products without restrictions will also need shedding the long-nurtured inhibition against their imports

The challenges lie first in becoming globally competitive in agricultural exports and secondly, in enabling the sharing of the benefits of trade liberalisation not by a small minority of rich farmers but by the majority of small and marginal farmers and agricultural workers in India.

1.Transitional period available for developing countries for full implementation of the Agreement and the need to extend the same

3. Minimal domestic support systems needed to ensure food security, which should go far beyond products and distribution to areas of equitable supply at affordable prices

4. Export subsidies to ensure that Indian commodity exports are competitive in the Global markets, considering that the developed countries have been consistently providing major concessions directly or indirectly to their exporters

6. Special Safeguard provision, which imposes import restrictions under certain conditions, which are considered to be discriminating against developing countries

7. Impact of phasing out quantitative restrictions by April 2001, which India had enjoyed on the basis of her Balance of Payment (BOP) problems

8. India's favourable total Aggregate Measure Support (AMS), which being negative, to be taken into account while considering the across the board commitments for tariff reduction agreed to by developing countries