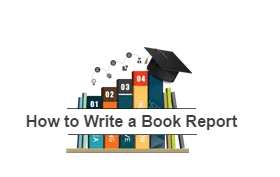 To write a book report, you are expected to do two things:
1. Summarize the material.
2. Detail your reaction to it.
读书报告包括两大部分：
1. 总结
2. 感想
Part 1 of a Report: A Summary of the Work
第一部分 作品总结
To develop the first part of report, do the following:
1. Identify the author and title of the work, and include in parentheses the publisher and publication date.  With magazine, give the date of publication.
标明作者名和作品名，出版信息在括号内注明。
2. Write an informative summary of the material. Condense the content of the work by highlighting its main points and key supporting points.
总结作品的要点
Tips:
1. Do not discuss in great detail any single aspect of the work while neglecting to mention other equally important points.  Summarize the material so that the reader gets a general sense of all key aspects of theo riginal work.
2. Also, keep the summary objective and factual.  Do not include in the first part of the paper your personal reaction to the work.
Part 2 of a Report: Your Reaction to the Work
第二部分 你的感想
To develop the second part of a report, do the following:
1. Focus on any or all of the questions below.
a. How is the work related to problems in our present-day world?
作品是如何与现实世界联系的？
b. How is the work related to your life, experiences, feelings, and ideas? For instance, what emotion did it arouse in you?  Did it increase our understanding of an issueor change your perspective.
作品是如何与你个人生活，经历，感受相联系的？
2. Evaluate the merit of the work: the importance of its points; its accuracy,completeness, and organization; and so on. You should also indicate here whether you would recommend the work to others, and why.
对作品进行评价，是否值得推荐及原因。
Points to Keep in Mind When Writing a Report
1. Apply the four basic standards of effective writing (unity, support, coherence, and clear, error-free sentences).
a. Make sure each major paragraph presents and then develops a single main point.  For example in the model report that follows, a paragraph summarizes the book, and the three paragraphs that follow detail three separate reactions that the student writer has. The student then closes the report with a short concluding paragraph.
b. Support with specific reasons and details any general points or attitudes you express. Statements such as “There are many good ideas in this article” and “This book is very interesting” are meaningless without specific evidence that shows why you feel as you do.  Look at the model report to see how the main point or topic sentence of each paragraph is developed by specific supporting evidence.
c. Organize the material in the paper.  Follow the basic plan of organization: an introduction, a summary consisting of one or more paragraphs, a reaction consisting of two more paragraphs, and a conclusion.  Use transitions to connect the parts of the paper.
d. Proofread the paper for grammar, mechanics, punctuation, and word use.
2. Document quotations from all works by giving the page number in parentheses after the quoted material (see the model report). You may use quotations in the summary and reactions parts of the paper, but do not rely too much on them.  Use them only to emphasize key ideas.

A Model Report
Here is a report written by a student in an introductory sociology course.  Look at the paper closely to see how it follows the guidelines for report writing described in this chapter.

I know Why the Caged Birds Sings:
Depth and Emotion Through Words
In I Know Why the Caged Bird Sings (New York: Bantam Books, 1971), Maya Angelou tells the story of her earliest years.  Angelou, a dancer, poet, and television producer as well as writer, has continued her life story in three more volumes of autobiography. I Know Why the Caged Bird Sings is the start of Maya Angelou’s story; in this book, she writes with extraordinary clarity about the pains and joys of being black in America. (introductory paragraph)
I Know Why the Caged Bird Sings covers Maya Angelou’s life from age three to age sixteen. When the book opens, she is a gawky little girl in a white woman’s cut-down lavender silk dress.  She has forgotten the poem  she had memorized for the Easter service, and all she can do is rush out of the church.  At this point, Angelou is living in Stamps, Arkansas, with her grandmother and uncle. The town is rigidly segregated: “People in Stamps used to say that the whites in our town were so prejudiced that a Negro couldn’t buy vanilla ice cream”  (40).  Yet Angelou has some good things in her life: her adored older brother Bailey, her success in school, and her pride in her grandmother’s quiet strength and importance in the black community.  There is a laughter, too, as when a preacher is interrupted in mid-sermon by an overly enthusiastic woman shouting, “Preach it, I say preach it!”  The woman, in a frenzied rush of excitement, hits the preacher with her purse; his false teeth fly out of his mouth and land at Angelou’s fee.  Shortly after this incident, Angelou and her brother are taken by her father to live in California with their mother.  Here, at age eight, she is raped by  her mother’s boyfriend, who is mysteriously murdered after receiving only a suspended sentence for his crime.  She returns, silent and withdrawn, to Stamps,where the gloom is broken when one of her mother’s friends introduces her to the magic of great book.  Later, at age thirteen, Angelou returns to California.  She learns how to dance.  She runs away after a violent family fight and lives for a month in a junkyard.  She becomes the first black female to get a job on the San Francisco streetcars.  She graduates from high school eight months pregnant.  And she survives.  (Part 1: Summary)
Maya Angelou’s writing style is impressive and vivid. (Topic Sentence)  For example, she describes the lazy dullness of her life in Stamps: “Weekdays revolved in a sameness wheel.  They turned into themselves so steadily and inevitably that each seemed to be the original of yesterday’s rough draft”(93).  She also knows how to bring a scene to life, as when she describes her eighth-grade graduation.  For months, she has been looking forward to this event.  Knowing she will be honored for her academic successes.  She is even happy with her appearance: her hair has become pretty, and her yellow dress is a miracle of hand-sewing.  But the ceremony is spoiled when the speaker—a white man—implies that the only success available to blacks is in athletics.  Angelou remembers: “The man’s dead words fell like bricks around the auditorium and too many settled in my belly…. The proud graduating class of 1940 had dropped their heads”(152).  Later, Angelou uses a crystal-clear image to describe her father’s mistress sewing: “She worked the thread through the flowered cloth as if she were sewing the torn ends of her life together”(208).  With such vivid details and figures of speech, Maya Angelou re-creates her life for her readers. (Part 2: Reaction. First Reaction Paragraph)
The strong images of the injustices suffered by blacks two generations age are well done and incredibly powerful.   (Topic Sentence) The description of seven-year-old Maya—when some “powhitetrash” girls torment her dignified grandmother, calling her “Annie” and mimicking her mannerisms—is emotional and raw.  In another incident, Mrs. Cullinan, Angelou’s white employer, decides that  Marguerite (Angelou’s given name) is too difficult to pronounce and so renames her Mary.  This loss of her name—a “hellish horror”(91)—is another humiliation suffered at white hands, and Angelou leaves Mrs. Cullinan’s employ soon afterward.  Later, Angelou encounters overt discrimination when a white dentist tells her grandmother, “Annie, my policy is I’d rather stick my hand in a dog’s mouth than in a nigger’s”(160)—and only slightly less obvious prejudice when the streetcar company refuses to accept her application for a conductor’s job.   Over and over again, Angelou is the victim of a white society. (Second Reaction Paragraph)
Although these injustices are disheartening, Angelou’s triumphs are inspiring.  (Topic Sentence) Angelou is thrilled when she hears the radio broadcast of Joe Louis’s victory over Primo Carnera: “A Black boy.  Some Black mother’s son.  He was the strongest man in the world”(114).  She weeps with pride when the class valedictorian leads her and her fellow eighth-graders in singing  the Negro National Anthem.  And there are personal victories, too.  One of these comes after her father has gotten drunk in a small Mexican town.  Though she has never driven before, she manages to get her father into the car and drives fifty miles through the night as he lies intoxicated in the backseat.  Finally, she rejoices in the birth of her son: “he was beautiful and mine.  Totally mine.  No one had bought him for me”(245).  Angelou show, through these examples that she is proud of her race—and of herself.  (Third Reaction Paragraph)
I Know Why the Caged Bird Sings is a remarkable book.  Angelou could have been just another casualty of race prejudice.  Yet by using her intelligence, sensitivity, and determination, she  succeeds in spite of the odds against her.  And by writing with such power, she lets the readers share her defeats and joys.  She also teaches a vital lesson: With strength and persistence, all people can escape their cages—and sing their songs.(Concluding Paragraph)